Around Rajasthan in an Ambassador

“There are no rules!” 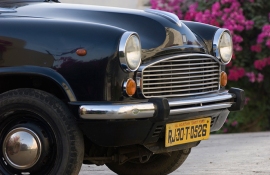 Khan was small, plain, and modest – a near polar opposite of the vast, grandiose, and relentlessly colourful land we were driving through, Rajasthan. His light brown complexion, wispy white beard, close-cropped grey hair, flat white hat and quiet confidence gave him away as a Muslim, though he had a penchant for Hindi music played at decibels normally reserved for heavy metal concerts. He spoke just enough English to convince you he wasn’t lost, but not enough to explain exactly where you were going. And he was friendly, but not warm, as if he knew his livelihood depended on tourists but resented the fact nonetheless. He was quiet but oft repeated one phrase with uncommon zest: “This is India, there are no rules!” He was also the worst driver I’d ever met.

We began to suspect as much early on in our ‘guided’ tour across the former stomping grounds of the maharajas. As Khan zipped through a roundabout in Jodhpur, we were quickly introduced to his obliviousness (or indifference) to oncoming traffic when an unfortunate motorcyclist was simultaneously introduced to the rear end of an auto-rickshaw. The rickshaw was forced to stop suddenly by Khan’s unpredictable route through the intersection. Despite the fact any reasonable observer would almost certainly blame us for the accident, Khan leaned out of his window laughing hysterically and pointed at the motorcyclist lying on the street next to his Royal Enfield. As we sped away, he turned to us and exclaimed in his best broken English, “Ha, stupid people!” My fiancée and I looked at each other uneasily wondering whether we were more deserving of that title.

Since hiring a car is the easiest way to see the area surrounding Jaipur, our first stop in Rajasthan, we arranged with our hotel to be picked up and chauffeured around for the day. The driver, Ajay (not Khan), picked us up in a dusty white Ambassador Classic. The Ambassador is a rather unique, Indian-made sedan reminiscent of an old Soviet Volga, or an East German Trabi. Ajay claimed the car was only two years old, though I never looked at the papers. We had heard the Ambassador described at “part tank, part Rolls-Royce,” but the dominant gene was definitely Panzer. Nonetheless, it was a far more comfortable way to travel through the Indian countryside than by bus or compact Tata. Despite its curious nature, the Ambassador has style. The ride was as smooth as possible on roads that only the most generous soul could describe as paved, and the ever-present exhaust fumes were merely a nuisance and not a nauseant in the air-conditioned interior. In fact, we liked the Ambassador and our knowledgeable, well-spoken driver, Ajay, enough that we hired them to drive us around Rajasthan for the next two weeks.

When Ajay and the Ambassador arrived a few days later to pick us up for our journey to Jodhpur, Khan was driving. As Ajay explained in friendly, near-perfect English, he was very sorry but his wife had malaria and was now in the hospital so he couldn’t drive us as we had agreed, but not to fear. Khan was an excellent driver, knew Rajasthan well, and had been driving for over 15 years. We reluctantly agreed, wished Ajay well, and set out on the half-day drive to Jodhpur across the barren countryside.

The rhythmic thump of potholes placed with diabolical consistency and the ever-present drone of Khan’s music quickly put me to sleep in the back seat. I was awoken by a hard swerve to the right. In my slightly groggy state, I realised that we were driving on the wrong side of the road. Apparently, Khan, unhappy with the speed of traffic on our side of the road, had decided that the other side looked more appealing. Now, anyone who has driven in India will be well aware that driving into oncoming traffic is disturbingly commonplace. The sight of semi-trucks speeding side by side towards us across both lanes had long since ceased to bother me much. In this instance, however, we were passing the slower traffic to our left on the wrong side of a median, on a four-lane highway. As Khan swerved back to our side of the road through a fortuitous break in that median, only narrowly missing an oncoming truck, he turned to us and explained for the first time, not to worry, “This is India. There are no rules.” We arrived in Jodhpur beginning to believe him and wondering if the same applied to the hiring and firing of drivers.

Two days later, driving from Jodhpur to Jaisalmer, the traffic thinned and the need for medians disappeared as the terrain became drier and we approached the Thar Desert. Herds of goats and cows quickly replaced trucks and auto-rickshaws as our most frequent obstacles. Khan navigated our bovine roadblocks with trademark panache, once forcefully nudging a large bull out of the way who appeared just as unhappy with our presence on the road as we were with his; and once foregoing the road altogether to whip around a large herd of goats at full speed through the desert brush, a plume of sand trailing behind us, covering goat and goatherd alike.

Most of the time, the horn was enough to convince our fellow road-users that staring down a late-model Ambassador with Khan behind the wheel was an unnecessary risk. The horn, it bears mentioning, is an ever-present feature of driving in India. In the West, the car horn says only one of two things: (1) you’re an idiot; or (2) I’m an idiot. In India, a horn says: I’m behind you; I’m beside you; I’m entering the road; I’m leaving the road; I’m passing you; you’re an idiot; or, I’m not slowing down. As opposed to English, Khan was fluent, though not quite eloquent, in horn and, much to our displeasure, had a lot to say. Khan’s horn, far from being applied strategically or simply overused, was a mantra, repeated over and over at interval, perhaps in the hopes of attaining Fahrvergnügen. During the entirety of what must have been his favourite song, he often honked along to the beat, apparently daydreaming he was in the band. It was the one thing Khan did right on our trip. It actually improved the song.

Once in Jaisalmer, we decided it was time to part ways. Khan’s creative driving and musical horn, not to mention his constant insistence on taking us, against our request, to overpriced hotels and restaurants where a hefty commission was available, had taken its toll. Not wanting to be too critical, I told him the bumpy roads were making my fiancée sick and we thought it best to continue by train. Perhaps sensing the truth or repeating a frequently-used plea, Khan whipped out his driver licence and, with a combination of regret and anger, exclaimed “I’m good driver. I drive for 15 years!” – blind to the subtle irony that though I have been hiring drivers for years, I’m still no good at it.

Nick Melzer is a lawyer from Los Angeles. He wrote this story as part of the Moonpeak travel writing course.

Moonpeak is an online and print magazine published in McLeodganj, Dharamshala, Himachal Pradesh, India. It features articles and interviews about travel, photography and books, with a focus on South Asia and Tibet. The magazine is based at Moonpeak cafe, restaurant and gallery on Temple Road, McLeodganj.
View all posts by moonpeak »
« Photography course: portraits
Moonpeak Magazine No. 4 »