At Tasmania’s Macquarie Harbour, dark deeds are swallowed by the primeval forest

On the map, Macquarie Harbour has the mouth of a crustacean: a barbed spike and a tight overbite. Behind this lies a vast briny belly. One of the largest harbours in the world, the port plunges deep into the Tasmanian wilderness, 260-odd square kilometres of dark water folded into forest, its edges needled with peninsulas and inlets. Backed by pyramid mountains and dense bush, this is a place that, once entered, is not so easily left. 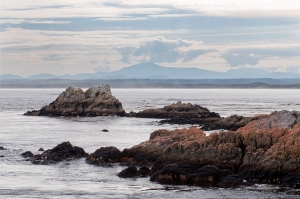 This thought crossed our minds as we made our way through the Conradesque streets of Strahan on our first morning, to catch a boat beneath a sky the colour of Wedgwood china. It occurred to us again an hour later, as the ship battled its way through the heads. Sitting in climate-controlled comfort on board a state-of-the-art cruiser might present little immediate threat of catastrophe, but a few things hinted at hidden dangers. One, the waters that writhed around us as we negotiated the 120-metre entrance. Two, the westerly that was visibly pulverising the hardy souls who had ventured out onto the bow. Three, a wisecracking skipper entertaining us with a succession of yarns from the days of sail and steam, when entering the harbour was, apparently, more a case of sink than swim. Four, the jagged rocks jutting up from the sea. Five, the lighthouses – not just one, but two. Six, the name of the entrance – Hell’s Gate.

Had we kept sailing into the wind, the next landmass we met would have been Patagonia, half a world away. Sensibly, we didn’t, and after a brief putter about the margins of the Southern Ocean and a wave to some lobster fishers, we turned about and went back into the harbour.

This is what you get when you venture to the west coast of Tasmania. Australia’s southern island has long been popular with tourists for its dramatic landscapes, rugged coastline, and towns that ooze heritage. Strahan has all this and more, namely, a genuine frontier feel beneath a veneer of creature comforts – and seafood. Lots and lots of seafood. More on that later

Almost the only place on the west coast that is accessible by road, the town is a more or less mandatory stop if you opt to drive round the island, which can easily be done in a week to ten days. Coming from the north coast city of Devonport, where the ferry from the mainland puts in, the only real hardship we had faced on the three-hour drive was the Tasmanian government’s stubborn refusal to invest in distance markers. Our exit route was to Hobart, the state’s cute-as-cupcakes capital, five hours drive southeast through acres of Tolkienesque forest and Georgian villages. 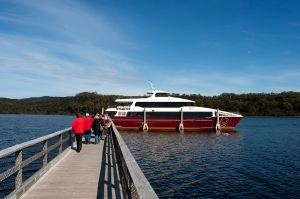 Arriving in Strahan just on dusk, we strolled the foreshore, a mixture of faux maritime kitsch and trading post rough and tumble: a fancy customs house, a sawmill, souvenir shops, and a boisterous pub packed with fishermen in flannelette shirts and baseball caps, drinking rum and Coke. We had fish and chips for dinner and booked tickets on the all-day harbour cruise, Strahan’s absolute must-do activity.

Hell’s Gate is the first place the boat visits. Sailing back past a succession of trawlers, we passed rows of fish farms, large circular pens holding up to 50,000 Atlantic salmon or ocean trout each, where workers spray fishmeal across the enclosures using something resembling water cannon. The booming industry produces some 9,000 tonnes of fish a year, most of it enthusiastically devoured by the Aussies themselves. Every once in a while a seal will break through the nets and salmon escape by the thousand, making rich pickings for local anglers.

Things weren’t always so peachy. Next stop on the tour was the once-notorious Sarah Island, a place associated with “inexpressible depravity, degradation and woe,” where “man lost the aspect and the heart of man,” in the words of historian John West. In a country founded as a penal colony, Tasmania was the dumping ground for repeat offenders. Of these, the hardest cases were shipped off to Sarah Island, which was judged so remote that escape would be impossible. The island, a tiny teardrop festooned with tree ferns and strewn with old bricks, today makes for a pleasant half-hour wander in the sunshine, but the history is grim indeed. 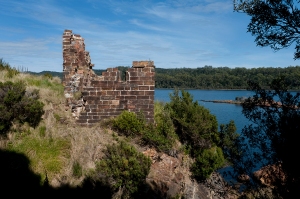 Convicts were put to work logging, tanning, making bricks and building ships amid howling winds and freezing rain. Food was short, scurvy was rife, and punishment was constant. A fortified version of the cat o’nine tails was used liberally, and two-week spells in solitary confinement were commonplace – the castle-like shell of the penitentiary is one of the few buildings still standing. Conditions were so harsh that 116 convicts attempted escape in the 11 years of the settlement’s existence from 1822 to 1833, despite ferocious ocean on one side, and impenetrable forest on the other. To make things even more difficult, fungus was baked into the bread so it would rot quickly and could not be saved for escape attempts. Only 15 of the escapees actually got away, the rest being captured, killed, or simply disappearing in the limitless wilderness to the east. Sarah Island has figured significantly in Australian literature, from Marcus Clarke’s nineteenth-century potboiler For the Term of His Natural Life, to Richard Flanagan’s postmodern masterwork Gould’s Book of Fish. Neither paints a pretty picture.

Yet this forlorn place was for a brief period the busiest shipyard in Australia. The reason can be found in the forests that surround the nearby Gordon River: the Huon pine. One of the longest lived species in the world, the timber is fine grained, soft and, because of its high oil content, all but immune to rot – one log is estimated to be 12,000 years old. Over 100 boats were built here, the last of which, the Frederick, was commandeered by convicts who sailed it to Chile. Four were arrested and brought back to Tasmania two years later, but were acquitted of piracy because the ship had not been registered at the time they stole it. The story is told in a cheesy stage production, ‘The Ship that Never Was’, performed every night in Strahan.

We boarded the boat once again to head up through the mouth of the Gordon River, once the highway down which the logs were floated. The distinctive mountain known as the Frenchman’s Cap – it does resemble Napoleon’s headgear – loomed closer and closer on the mainland. This was the landmark convicts would aim for when they attempted escape. The peak stands amid a cluster of three national parks, a World Heritage-listed wilderness that takes up a fifth of Tasmania’s landmass, with ecosystems stretching back millions of years. 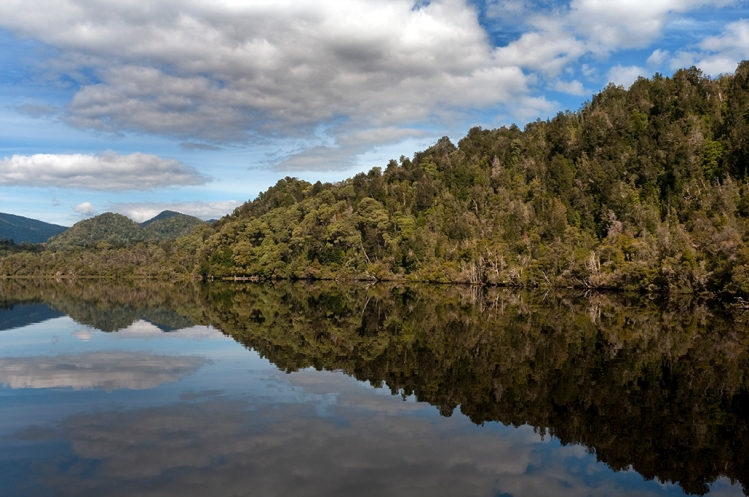 It was time for lunch, a buffet of salads, pasta, and cold cuts – the usual stuff, but nice enough. It was only when people began to go back for their second helping that the caterers’ plan became clear. The first course had been cleared away and replaced by two mountainous platters of smoked salmon. We’re talking twin peaks here – the Frenchman’s Cap looked modest by comparison. After a brief frisson of guilt about the starved convicts, we tucked in. It was enough to keep a hundred or so passengers occupied for the next hour, somewhat to the bemusement of our captain. By the time we were all on our third plate, he was pointing out with wearied exasperation that the views of the Gordon were becoming rather spectacular, and all but ordering us to leave our tables, go outside and take photographs. And yes, our food would still be there when we got back. 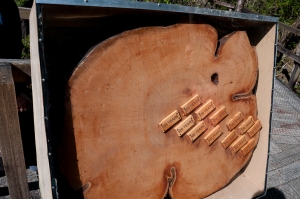 He was right, on both counts. The wind had dropped in the shelter of the river, and the afternoon had turned to glorious sunshine. The reflection formed a perfect diamond pattern as the tannin-soaked river mirrored the sclerophyll-tangled hills, before curling and marbling in the boat’s wake. Beyond the water, no sign of human presence was anywhere to be seen – a blessing, to be sure, but it all might have been very different. In the 1970s and 1980s the river became a battleground between environmentalists and state authorities, who were planning to dam it for hydroelectricity. Many arrests were made, and activists from all over the country joined the fight, which they eventually won in 1983. It was a landmark victory for Australia’s green movement, with the Australian Greens now holding the balance of power in the federal Senate.

After 14 kilometres of river bends and diamond-patterned wonder, we alighted at Heritage Landing, where a small jetty led to a boardwalk over dense bush. We were here to see one of the few existing stands of Huon pine – although the trees live for up to 3,000 years and one stand is estimated to be 10,000 years old, most of them were logged in the space of just over a century. A gigantic log lay on its side, but sprouting from it were multiple shoots of new trees. Huon pine is a protected species these days. Dead logs can still be harvested, but the trees take so long to grow that it will be a very long time before they are used for anything except expensive souvenirs. 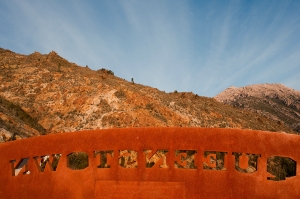 Then it was time to head back into town. The thought of a couple more days in Strahan was tempting – there is a recently refurbished railway to nearby Queenstown, seaplane tours, heritage tours, and mountain bikes, windsurfers and sand toboggans for rent, to name just a few options. Unfortunately, escape is a little easier than during the convict days. Time was pressing on our whirlwind trip round the island, so we drove out that evening via Queenstown, 40 kilometres away. The copper mining town stands in an apocalyptic landscape, a wasteland of mountains denuded by smelter fumes and rivers which once carried 1.5 million tonnes of mine tailings annually. The sight is so stark – and so starkly at odds with what we had just witnessed – that it has become a tourist attraction in its own right. If we needed proof that in Tasmania, flawless nature does not always win the battle with with human wickedness, foolishness and greed, then this was it.

Moonpeak is an online and print magazine published in McLeodganj, Dharamshala, Himachal Pradesh, India. It features articles and interviews about travel, photography and books, with a focus on South Asia and Tibet. The magazine is based at Moonpeak cafe, restaurant and gallery on Temple Road, McLeodganj.
View all posts by moonpeak »
« Tibetans protest
Exhibition – ma yellow diamond »

0 thoughts on “Where heaven meets hell”