Once a crossroads on the Silk Route, Tajikistan these days sits uneasily astride Afghanistan, China, and some other tricky neighbours. That doesn’t mean its people don’t know how to have a good time.

“Vous parlez Français?” asked Abdurauf Razokov. Surprised, I mumbled a schoolboy “un peu” to the elegant, silver-haired archaeologist as he got into the jeep. It wasn’t really what I’d been expecting when I turned up in Panjikent, after a 10-hour drive over loose-sided mountains, a snowbound pass and wind-scoured high desert. Several hundred kilometres behind us lay Dushanbe, the capital of Tajikistan. On the horizon I could see the mountains of Uzbekistan, snugly ensconced behind a barrier of minefields. After a month bobbing in and out of ex-Soviet Central Asian republics I was getting used to the idea that English really isn’t the international language. But it had never occurred to me to brush up my French.

Abdurauf barely noticed, or perhaps he had, as he now reverted to Tajik, gushing out a stream of historical facts to Nigina, my translator.

“This was a major centre until the Arab invasion, in the eighth century,” he was saying. “They had already captured Samarkand and Bokhara by 722 AD. Panjikent held out against them but the Arabs were advancing. The ruler led his army into the mountains, but the Arabs captured him. They took him to Baghdad and beheaded him.” 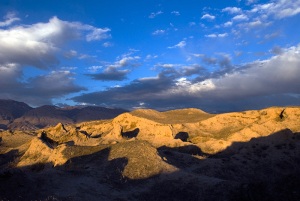 We climbed the city wall of Old Panjikent, its arrow slits still visible in places. The excavation rose like an amber sea in front of desiccated mountains veined with erosion. Then the sun broke through the cloud and golden light flooded the ancient city, peeling back the centuries.

Abdurauf pointed out the remains of large houses, a winery, and a fire temple. Old Panjikent had been a settlement of the Sogdians, wily Silk Road traders who presumably found comparative advantage in religious tolerance. Buddhists, Hindus, Christians and Zoroastrians had lived in the city before the Arabs sacked it.

The Sogdian kingdoms, which had once told Alexander the Great to take a walk (and lived to regret it), were for all intents and purposes finished off by the Arabs, although some of the people fled to remote Yaghnob gorge, where they still speak a version of the language.

As I took a photo, Abdurauf took the opportunity to put his arm around Nigina. 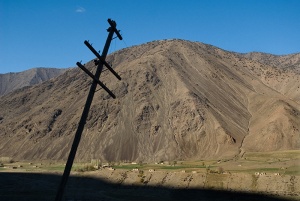 The Tajiks proudly claim descent from the Sogdians and consider themselves the most ancient people in Central Asia. Clearly, the Muslim conquest had not penetrated the national psyche beyond a certain point. We were staying at the home of the local neurosurgeon— Panjikent’s only hotel had been deemed uninhabitable—and that night our host plied us with vodka and homemade wine as we devoured a mountain of rice, mutton and naan. Throughout the meal Abdurauf regaled us with tales of marital infidelity in Paris, where he had studied in the 1990s. A little later, as he looked through my photos, I was bombarded with drunken shouts of “Ca c’est superbe!” and—in response to a picture of himself and Nigina silhouetted against the sunset—“Ah! C’est Romeo et Juliet!”

Unnoticed by Abdurauf, Juliet had looked round the door a few minutes earlier and fled to her room.

The breakup of the Soviet Union left Tajikistan high and dry. Once straddling the Silk Road, the country now finds itself stranded between Afghanistan, China, Uzbekistan and Kyrgyzstan. Over 90 per cent of its area is mountainous, plagued by avalanches and landslides. Add to that a national airline that its inhabitants will tell you—not without a hint of perverse pride—is the worst in the world, and it takes a fair bit of determination to get there. 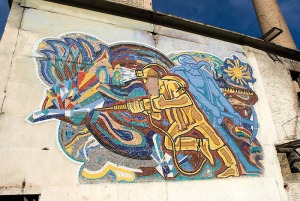 I was determined. Under contract to the State Department, I was documenting cultural preservation projects sponsored by the US government in Central and South Asia. I had already visited Kazakhstan, Kyrgyzstan, Turkmenistan, Pakistan and Afghanistan, flying in long, frustrating loops to cover what was once the world’s superhighway. Each country had been dazzling, and unique, and I was keen to add Tajikistan to the list.

Finally, I found a flight from Kabul to Dushanbe on an ancient Russian turboprop. A stencil by the door read, “Chop here with crash axe.”

In the Tajik capital, leafy boulevards and trundling trolleybuses wended their way past down at heel apartment blocks and the colonnaded headquarters of the departed communists. Only hours from the dusty bleakness of Kabul, I felt as if I was in some forgotten and none-too-prosperous corner of Europe.

That impression was dispensed with the same afternoon as I photographed the largest surviving Buddha statue in Central Asia. Discovered in 1966 in southern Tajikistan, then sliced up, brought to Dushanbe and reconstructed in 2001, the seventh century, 14-metre Buddha now reclines gracefully in the Museum of National Antiquities, occupying a room decorated a bit like a hotel lobby.

The rest of the museum was exquisite. There were delicate Hellenistic ivory carvings from the Bactrian period, and part of a large statue of Shiva and Parvati from Panjikent. The Persians, the Greeks, the Macedonians, the Chinese, the Indians and finally the Russians had all put their two cents worth into Tajik culture at some point or another.

That evening over dinner my embassy contact, Abdul Malik, told me about his country. We were sitting in what was loosely known as a teahouse, scoffing borscht, salad, chicken shashlik and beer. Downstairs, a wedding party was getting raucous.

“After independence from Moscow, there was a civil war. Basically it was one clan fighting another. But one side was backed by Russia, and the other by Islamists. The Russian side won. So radical Islam is not tolerated. But about 50 per cent of people practise Islam. Ask me what I am and I will say I am a Muslim. I don’t pray, I don’t fast, and I drink vodka, but I am a Muslim!”

By the end of the civil war much of the educated elite had fled to Russia, Israel or America. The Tajiks, no fans of the Taliban, supported the US-led invasion of Afghanistan, but still suffer from isolation and the kind of rampant corruption that scares off investors. Much of the economy is fuelled by the drug trade between Afghanistan and Europe, which transits Tajikistan.

The Tajiks, in other words, have every reason to be irritable. I found them warm, welcoming and hilarious.

I declined Abdul Malik’s invitation to visit one of Dushanbe’s nightclubs, which expat friends in Afghanistan had spoken of with longing. Back in my hotel room, the cable TV offered, at a guess, 300 channels. At least 20 featured women who were either naked, or about to become naked.

I was getting the picture. Two thousand years of conquest and trade had leavened the tolerant Tajik soul with Russian booze, Middle Eastern food, Islamic hospitality and a liberal dose of Mediterranean lechery.

On our second day in Panjikent a slightly hungover Abdurauf showed us around Sarazm, the site he supervised. Dating to the fourth millennium BC, it is the oldest city yet discovered in Central Asia. The settlement had grown rich working the lead, gold, copper and lapis lazuli that abound in the surrounding mountains, trading as far afield as Baluchistan, Persia, and the Aral Sea. Seashells found in the grave of a local noblewoman are thought to have come from the Indian Ocean. 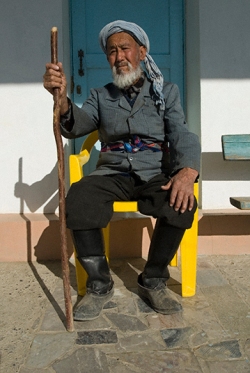 Then we were introduced to 86-year-old Ashor Ali Tylonov, who had stumbled across an axehead while crossing a field in 1972, leading to the excavation of the site. With his pointed beard, high boots and turban, he looked every inch the Central Asian patriarch. “Thousands wanted that axehead, but I kept it until 1976. I thought the archaeologists should have it. I also found three kilos of gold!” he said. “I will tell Abdurauf where it is just before I die.”

Turning to me, he spoke through Nigina. “You are from Australia? I have read about it. There are wild dogs there. The population is 18 million. There are sheep, and many ports, and people live by the ocean.”

That afternoon, our work finished, Abdurauf took us to a conglomerate embankment beside a river to see the openings of ancient tunnels.

“Perhaps they were used for irrigation, like those found in Kazakhstan and at Turfan, in China. Those ones are kilometres long! No one has investigated these yet—they may run all the way to Samarkand, 45 kilometres from here,” said Abdurauf. “But I think it is a good place to bring your lover.”

Nigina was already walking towards Dushanbe.

Moonpeak is an online and print magazine published in McLeodganj, Dharamshala, Himachal Pradesh, India. It features articles and interviews about travel, photography and books, with a focus on South Asia and Tibet. The magazine is based at Moonpeak cafe, restaurant and gallery on Temple Road, McLeodganj.
View all posts by moonpeak »
« Ladakh’s turquoise jewels
Far stranger than fiction »