Many people visit Dharamshala to get an experience of Tibetan culture, which has been under severe strain since the Chinese occupation of Tibet in the 1950s. For decades, exiled Tibetans have gone to great lengths to preserve their unique culture, but a recent campaign has added fresh impetus to their efforts. It can be witnessed in action every Wednesday in the exile capital.

The campaign, born in Tibet, asks Tibetans to underline their Tibetan identity. Lhakar, as the movement is called, encourages Tibetans to wear their traditional gown, or chuba, to speak in Tibetan and to eat Tibetan food on Wednesdays.

The name Lhakar is made up of the Tibetan words Lhakpa (Wednesday) and Karpo (white, pure, true, just), and is rooted in tradition as Tibetans consider Wednesday to be especially sacred for the soul of their spiritual leader the Dalai Lama.

“It is successful because it fits well in the community as a cultural or religious movement. Tibetans support religious activities more than the political ones. Its clever association to the auspicious Wednesday gives it a wide reach among the community,” said Dorjee Tseten, Director of Students for a Free Tibet, India. 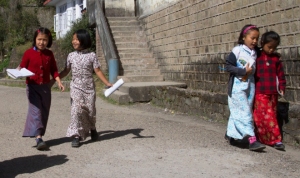 Its patriotic message is finding support among Tibetan schools as well. About 2,000 students at the Tibetan Children’s Village School are now asked by the administration to turn up in chuba to attend classes every Wednesday.

“We want our children to have a modern education while being rooted in our Tibetan traditional values,” said  Namdol Tashi, Principal of the Tibetan Children’s Village School in Dharamshala. The school, which started in 1960 as an orphanage under the care of the Dalai Lama’s elder sister, houses and educates more than 2,000 refugee children.

The news of the Lhakar movement spreading in Tibet was first received in Dharamshala by a 32-year-old monk, Kanyang Tsering. A contact, whom Tsering is reluctant to name, phoned him from Ngaba (Chinese: Aba, in Sichuan) sometime towards the end of 2008 and asked him to help spread the message in exile.

“He told me that Tibetans in Ngaba were taking a pledge to act like citizens of a free country every Wednesday by wearing traditional clothes, eating Tibetan food and speaking only in Tibetan. He also said that Tibetans were visiting only Tibetan shops and restaurants on that day,” said Kanyang Tsering, speaking in Dharamshala via a translator.

Tsering stays at the Indian branch of the Kirti Monastery in Dharamshala. The parent monastery in Ngaba, where he studied for nine years before escaping into exile, has been at the forefront of the Tibetan self-immolations. Twenty-seven of the immolations since March 2009 have emanated from Kirti. The internet access to Ngaba area has been cut off by the Chinese authorities since March 2011.

After the news about Lhakar started trickling into exile from various parts of Tibet, the Tibet support groups in exile started popularising it. Tenzin Tsundue, a Tibetan writer and a political activist based in Dharamshala, has been instrumental in spreading the message of the movement.

“Lhakar was born from a simple need of the Tibetans inside Tibet to make a statement against a regime that threatens their Tibetan-ness. There was a great loss of life in 2008, and people needed something simple to carry forward a movement which didn’t provoke the suspicious Chinese authorities,” said Tsundue.

Hundreds of Tibetans took to the streets protesting China’s rule just months before the Beijing Olympics, prompting quick reprisals from the authorities.

Tsundue sees the homogenising market forces in Tibet as a threat to the unique Tibetan identity. More Chinese migrate each year to Tibetan areas in search of better economic opportunities, pushing ethnic Tibetans to a minority in some places including the Tibetan capital, Lhasa.

Lhakar is leaderless and its tenets are easy to understand. It is not overtly political and is not seen as a protest movement.

“The beauty of Lhakar lies in its embrace of simplicity. It focuses on the fundamental elements of freedom, the most mundane decisions a person makes in her daily life”, writes activist Tenzin Dorjee in a message on Lhakar.org, a website promoting the movement.

The website, a co-ordinated effort by 12 Tibetan activists including artists and writers, points interested Tibetans to Tibetan language resources and explains ways to use the language online. A recent post talks about using a virtual Tibetan keyboard to post messages in Tibetan on Facebook.

“We have received pictures from Maqu in Gannan  province, where Tibetans, inspired by Lhakar’s message, are organising language classes voluntarily and are discouraging Tibetans to use Chinese words in their conversations,” said Dorjee Tseten, who also writes for the blog lhakardiaries.com.

Tibet Times, a Tibetan-language newspaper based in exile, reported in November 2010 that Tibetans were paying a voluntary fine of one yuan for each non-Tibetan word used in their conversations in the area surrounding the Sershul Monastery in Garze Tibetan Autonomous Prefecture of Sichuan province.

For Dorjee Tseten, Lhakar is a powerful idea seeking connections to Tibetan roots. He calls it ‘the most important movement’ since the armed occupation of Tibet by China.

“It is about asserting who I am,” says Bhuchung D Sonam, a Tibetan writer who is comfortable writing both in English and Tibetan.

“By saying I am a Tibetan, I am making a strong political statement. But it has to grow beyond a symbolic gesture by being part of our everyday lives,” said Bhuchung.

Pema Yoko, a Photo Media graduate from Brunel University, posts on Tibetan food on Facebook and the lhakardiaries.

“I wanted to post something lighthearted yet connected strongly with the Tibetan identity, so I chose food and post short videos on lhakardiaries,” said Yoko.

The social media site Facebook featured Tibetans’ effective use of the site to promote Lhakar in its new section Facebook Stories in September 2012.

Yoko, whose father is Tibetan, was inspired by Lhakar to come to Dharamshala and learn the Tibetan language formally.

“For me Lhakar is a mind revolution,” said Yoko.

“China constantly promotes the impression that the government is looking after the minority rights. They cannot object to Tibetans asserting their cultural identities,” said Tsundue, who calls the movement “risk-free and sustainable”.

The movement is supported by the Tibetan government-in-exile, which badly needs fresh ideas to respond to a spate of self-immolations by Tibetans protesting China’s rule in Tibet. More than 50 Tibetans have immolated themselves since 2009, resulting in more than 30 deaths.

In a recently concluded meeting of Tibetans, an increasing advocacy of Lhakar was suggested by the prime minister Lobsang Sangay as one of the means to increase global support for the Tibetan cause.

Moonpeak is an online and print magazine published in McLeodganj, Dharamshala, Himachal Pradesh, India. It features articles and interviews about travel, photography and books, with a focus on South Asia and Tibet. The magazine is based at Moonpeak cafe, restaurant and gallery on Temple Road, McLeodganj.
View all posts by moonpeak »
« Far stranger than fiction
Eugene Atget at the AGNSW »