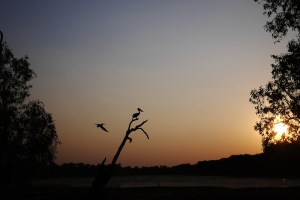 Leaving the boat on idle, Mardediydiy did something none of the rest of us would dare: he leaned over the side and picked up one of his spears. Four of the fearsomely efficient implements, each tipped with an ironbark head, floated in the river. One by one, our guide lifted them out of the water that, just half an hour before, he’d warned us not to extend so much as a hand over. Fair enough: on our way here we’d spotted four saltwater crocodiles either basking on the beach or floating just  beneath the water. The crocodiles could jump, the guide explained, and between three and four hundred of them lurked in the gemstone-green waters of the East Alligator River – the misleading name bestowed by an early explorer whose zoology was not  quite up to scratch. Sharks and stingrays also frequent the tidal waterway, along with 75 other species of fish.

Perhaps Mardediydiy, or Robert as he had introduced himself earlier, knew something that we didn’t. Born in Arnhem Land, he’d shared his local knowledge as he guided the aluminium-hulled, flat-bottomed boat up the river. We had passed between lush, sandy banks tangled with hisbiscus and pandanus on one side, and low, ochreous sandstone cliffs on the other. To us it was an idyllically peaceful landscape; what it meant to Robert as he pointed out food sources and medicinal plants, and told us the stories of his people, I won’t even attempt to say. To describe it as a supermarket, a pharmacy and a playground would be trite; to say that he had a spiritual connection to the land would be to labour profundity with cliché. The story that really stuck in my mind was that when he was a newborn baby, he’d been wrapped in the soft, springy skin of the paperbark tree. When he died, his body might be treated the same way. This man was part of the land on which he trod. 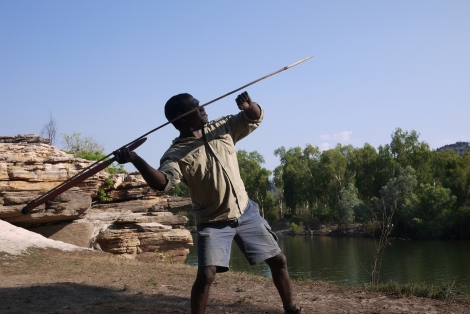 On one side of the river lay Kakadu National Park, a wonderland of otherworldly beauty which we’d been exploring for days. On the other lay Arnhem Land, a 100,000 square kilometre indigenous reserve which outsiders may only visit with a special permit. Kakadu contains at least 5,000 works of rock art; the didgeridoo was invented in this area, carved from the trunk of the  woollybutt, which feeds on its own sawdust after termites have hollowed it. Reaching the turnaround point of the cruise, Mardediydiy had hitched the boat to the bank on the Arnhem Land side, so for a few minutes we could get an unauthorised taste of his home.

It was here that he’d performed his spear-throwing demonstration. Mounting each spear, one by one, into his bondok, or spear thrower, he had leaned back and in a single, liquid movement sent the shaft sailing in a perfect arc 30 metres across the  river, to land just short of the opposite bank. Each spear had landed in the same spot, and lay floating in the opaque water until he picked them up a few minutes later. As we puttered back towards our launch point, he pointed out more of the flora and fauna.

The pandanus roots could be used to  make paintbrushes, or its fruit to deoxygenate water to stun fish and catch them. Hibiscus is used to make spears and for slow-burning firesticks; its flower is good for treating stomach ache. The silver leaves of the paperbark could be used to flavour fish, and its soft, fibrous bark for everything from bedding to cups and plates. A bulge in the side of one tree indicated a source of fresh water – three to four litres, very useful in the dry season. Just pierce it, and close it over agan so it replenishes itself. A piece of rock art on one of the sandstone cliffs indicated that there were plenty of catfish at this place. This was the knowledge that had sustained the Gagadju people for generations, through tens of thousands of years of wet season deluge and dry season scarcity. 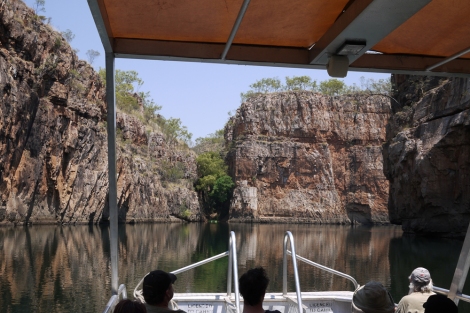 Our journey had begun five days before, at Nitmiluk, or Katherine Gorge, where a swelling river has gouged dozens of metres into a sandstone bed, creating a haven for peregrine falcons, freshwater crocodiles, and boatloads of awestruck tourists. On our way out, stopping for groceries in Katherine, we had witnessed the dysfunction of indigenous Australia: the dispossessed and the drunk, listlessly shuffling about the baking main street of a tiny outback town. Kakadu would be a whole different story.

A couple of hours’ drive north of Katherine brought us to the national park, and soon after, to the turnoff to Gunlom. Thirty-seven kilometres of twisting dirt road sprouted numerous small tracks; about 500 Aboriginal people live in Kakadu, observing traditional lore and passing on their immense knowledge of country. Much of Kakadu was returned to its original owners through native title in 1979, and the national park is now administered  jointly by the Aboriginal owners and the national parks administration. It is one of the few World Heritage sites which combines great cultural significance with ecological uniqueness. Part of the struggle to declare the park centred on mining rights; a leak-prone uranium mine still sits within the park’s boundaries.

Gunlom was a sprawling campground alive with clouds of flies, nests of ants and a pack of dingoes that howled at dusk but remained invisible. A herd of brumbies, left over from pioneer days, worried at the perimeter fence, and whinnied in the night; a snake was spotted by the ladies’ washroom. In other words we were enjoying a satisfyingly authentic slice of the Australian outback; with mesh tied over our faces to keep the flies out of our mouths and eyes, we made a cup of tea and enjoyed the view of the escarpment that towered behind the trees. We had the place almost to ourselves. 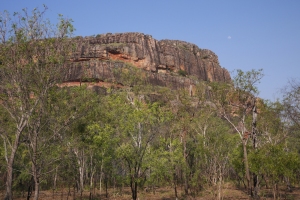 Making a notch in the crown of the hill was a refreshingly croc-free creek surrounded by gigantic boulders and tiny pockets of bush. Climbing up to it in a sweaty 20-minute burst on our second day, we found a series of pools shaped like inverted pyramids, linked by gentle trickles and leading to a wall of rock like an infinity pool. We lazed in it for most of the 37-degree day, watching goannas hunt for the wildlife that skittered about the surface, or taking in the view over the sheer wilderness of the South Alligator River valley. Well, not quite sheer wilderness. Thirteen uranium mines opened in the valley in the 1950s, only to close in the 1960s. The cleanup didn’t begin until the 1980s, and piles of tailings were still being discovered in 2000.

Random piles of radioactive waste aside, the most surprising thing about Kakadu is its range of landscapes. Three hours after leaving Gunlom and its dry escarpments, we were amid primeval wetlands that, for all their honking, wing-flapping busyness, had about them the eerie stillness of a different epoch. At Bubba, a feral buffalo stalked in the distance beneath an orchard-like row of trees, its quiet tread and far-off bulk conveying the strangeness and faint menace of a children’s book illustration. The inevitable crocodile warning signs were more ominous than  ever: we were all alone in their territory now, treading spongy footpaths between forests of woollybutt and paperbark, the water just a stone’s throw away. Nearby, Anbangbang Billabong might have been an illustration from a birdwatchers’ guide: heron, ducks, pelicans, ibis, spoonbills, egrets and cockatoos, some of them black with spectacular rainbow and crimson flashes on their tails or crests, all shared a dark disk of water surrounded by forest and overlooked by the looming mass of Nourlangie Rock. 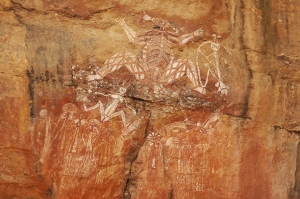 The Aboriginal presence filled the air. No chance here of making the claim, as urban Australians sometimes do, that the area they occupy has no history of indigenous habitation. At Nourlangie Rock, a short climb brought us to an overhang sheltered by a massive conglomerate slab; below us, light green eucalyptus carpeted the floodplains all the way to the Arnhem Land escarpment, far off in the distance. Evidence excavated from the floor of the cave proves that this was a meeting point for at least 20,000 years. While organic remains show it had been occupied in recent millennia, the discovery of scraping implements points to the use of skins, suggesting a cooler climate. Nearby rock art depict the use of a boomerang, which would have been impossible in the current environment of dense forest. This too suggested a cooler, more open ecosystem. In other words, the cave where we stood cooling off from the searing heat had been in continuous use as a shelter since the last ice age.

Continuous was the word: around the corner, a painting depicted the lightning man Namarrgon and his wife Barrginj, associated with fertility. Far from remaining unchanged since time immemorial, this particular painting had been added to since the naturalist David Attenborough photographed it in the 1960s.

Next day we were at Ubirr rock. Wandering amid the galleries, with copious pictures of turtles, barramundi, goannas and wallaby, we saw a painting of a thylacine or Tasmanian tiger, long since disappeared from this area, and not seen in Tasmania since the 1930s. Thylacine became extinct in mainland Australia during the Aboriginal period; white people finished them off in Tasmania.

We made the short walk to the top of the rock to see a green plain being turned to gold by a crimson sun, trackless and utterly still. A place from another time. Dozens of tourists, from America, China, France, and all over Australia, maintained a respectful hush until the sun dipped below the horizon.

Leaving the park next morning, we investigated the place we perhaps should have visited first: the Bowali Visitors’ Centre, with an excellent display about Kakadu’s environment. Ranger talks at Anbangbang and Ubirr, and the well-designed Warradjan Aboriginal Culture Centre had added enormously to our appreciation of  Kakadu, but Bowali presented some intriguing facts. The areas of uranium deposits were known traditionally to the Aborigines as ‘sickness country’. The park is home to more than 200 species of ants, over 1,000 species of flies, 100 reptiles, 64 mammals and 1,526 types of plant. We also learnt that 60 per cent of the world population of magpie geese nests in the park each year at the exceptional Mamukala wetland. These beautiful black and white birds, once common in parts of eastern and southern Australia, are now much reduced in those areas.

Moonpeak is an online and print magazine published in McLeodganj, Dharamshala, Himachal Pradesh, India. It features articles and interviews about travel, photography and books, with a focus on South Asia and Tibet. The magazine is based at Moonpeak cafe, restaurant and gallery on Temple Road, McLeodganj.
View all posts by moonpeak »
« Eugene Atget at the AGNSW
Hitting boundaries for six »