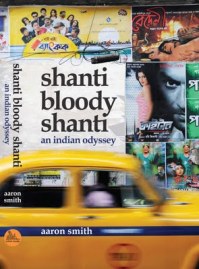 Ever wondered where they come from, the dreadlocked, tattooed, shirtless beardies who occupy the bottom echelon of backpacking in India, absorbing half-baked philosophy from any willing sadhu to have caught the scent of some rupees, roaring about on Enfield motorbikes from one trance party to the next? Ever wondered what becomes of them? If you’re interested, Aaron Smith has some of the answers.

Taking off from Australia in a hurry with a drug lord on his tail, the 36-year-old ex-junkie, failed actor and divorcee lands in Bombay on a round the world ticket purchased in five minutes flat. His adventures continue from there, through Goa’s nightclub scene, Auroville, the Andamans, Calcutta, Darjeeling, Varanasi and, finally, the Himalayas. Not much is left to the imagination as the narrator chronicles the drug frenzies, the all night card games and drinking sessions, the aimless plodding from one stop on the circuit to another as the thrills on offer gradually wear thinner. As a memoir, it is brutally honest and true to its subject; which means that as a piece of writing, you sometimes wonder where it’s all headed.

The one real quest seems to be for female companionship. Women cross Smith’s path, but all elude him in some way or another. This is a man in search of something, but without a clue what it might be. That can be the problem with India: as long as it offers everything, it also offers nothing.

There is a supposed travelling companion, Frankie, who on the surface seems to be a more successful ‘traveller’ than Smith, both in finding willing bedfellows and in working the whole sleazy system to his advantage. But Frankie is not a character to envy, and the more elusive he becomes, the more Smith is able to immerse himself in the quest for meaningful experience. If this means nightmarish acid trips in Calcutta, bouts of Delhi belly, an unwanted encounter with narcotics and yet another unrequited dalliance in Varanasi, then it’s a measure of the circumference of his world. The yoga and bits of Hindu lore picked up along the way rattle like trinkets on a necklace; there is even a bit of thrown-in Aboriginal spirituality. By the time Smith reaches Rishikesh and gets involved with yet another circle of drug-addled friends, there seem few places left to go.

Except death, of course, gruesomely exhibited in the form of the corpse of a backpacker discovered by Smith and friends in a shallow grave on the banks of the Ganga. Probably the victim of some kind of dodgy business gone wrong, or simply an opportunistic robbery, the body excites little interest from the police, who claim it is outside their jurisdiction. Disappearances of random foreigners from the trail are commonplace enough in this part of India, and certainly more frequent than any official figures would suggest.

From this horror emerges the sacrifice that finally saves Smith, deflecting him into another life that is unlikely but plausible. A glacier is climbed; a beautiful girl dies; the gang set their senses straight, somewhat predictably, in Dharamshala, that neutral space that hovers somewhere just outside and beyond India itself. A plane is caught and a new life is assembled that couldn’t have been imagined without the experience of India, whatever exactly that might have been. Perhaps it all adds up to something after all.

Moonpeak is an online and print magazine published in McLeodganj, Dharamshala, Himachal Pradesh, India. It features articles and interviews about travel, photography and books, with a focus on South Asia and Tibet. The magazine is based at Moonpeak cafe, restaurant and gallery on Temple Road, McLeodganj.
View all posts by moonpeak »
« Favourite books on Tibet and Dharamshala
The professionals »