Tenzin Dorjee was one of the first Tibetan exiles to train in photography, at Rochester Institute of Technology in the US.  Now based in Canada where he shoots for a Toronto city magazine, he recently visited India to work on a series of portraits of Tibetans in different occupations. He spoke to Moonpeak about the project, and about the tricky business of making a career in photography. 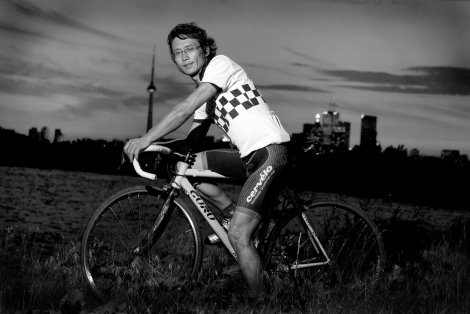 I had this idea a long time ago because when I was in the Tibetan government working as a photogapher I did a project about exile stories, basically stories about the settlements and people in India. While doing it I realised I wanted to do something different from the pictures you see on Tibet. Most of the pictures you see are very cultural or they’re very political but therre’s nothing about contemporary Tibetans like my generation, about normal life. So when I went to Switzerland in 2000 I shot a couple of portraits of hard rock musicians, I shot a guy who was a train ticket master, and those images stood out in my mind. I want to continue that kind of a project in a slighty different style, not in documentary style, in environmental portrait style. There’s a lot of Tibetans in Canada. The first portrait I did was a 12-year-old girl, she’s a gymnast. Then I shot her dad who’s a postman. I ended up shooting basically people I know and friends of friends, so it’s easy access. I shot a friend of mine who’s a chef, I shot a friend’s wife who’s a nurse. I want to shoot a wide range of Tibetans who are doing different jobs – even though it’s about exile stories, I want to tell it through a different angle, a different eye.

How many pictures have you got so far?

How many do you want to get?

I want to get minimum 100. It’s a slow process because you need to call them up, you have to set up appointments, sometimes you need to get permission from the institution where they’re working.

Are there a lot of Tibetans working in different professions now as compared to before?

Definitely. Especially in India I’ve seen a lot of changes, especially since I’ve left. In Delhi now I hear about a lot of Tibetans doing all kinds of jobs from call centres to doctors to tattoo artists to a salsa teacher to architects – all kinds of people, so that’s interesting for me. I don’t want to shoot, like, just monks. Also I don’t want to forget the older generation too – I want to shoot the opera teacher, the scholar, the Dalai Lama’s translator. But I also I want to shoot younger Tibetans doing different jobs, for example we have truck drivers in Toronto, we have a taxi driver in New York City, we have doctors, we have nurses.

What will you do with these pictures eventually?

Eventually I want to do a travelling exhibition if I get good funding. My aim is to show it to Tibetans. I really want the Tibetans to see, we know there are doctors, truck drivers, all kinds of people, but when they see it in the picture, it means something different. I want it to travel to New York, Toronto, anywhere there’s a large Tibetan community, Zurich, New Delhi, Dharamshala, then if I could take it to the settlements it would be wonderful. And I’m trying to make it a multimedia project, I’m interviewing all the subjects so I want to make a small multimedia program, a slideshow with sound and interview behind. I can have a TV set on the side and loop it through. If I can make an app for iPhones and Android phones that’d be wonderful, so people can download and see the exhibition.

Are there many Tibetans working in photography now?

What’s your advice to these younger guys?

First of all pursue this profession if you’re really into this medium because this medium, unlike many years ago, is a difficult profession to make a living. If you like it, if you have an interest in it, if you have a passion for photography then do it because it’s a wonderful profession. If you do something that you like then it’s beautiful, it’s wonderful. You’ve got to do what you love to do, but also make a living out of it. Another thing is if you want to do editorial or documentary photography, it’s not just about the photography technique or how well you know about the camera or the exposure, it’s not just that. You have to know about the subject. You need to study it. If you want to shoot in India you need to study India, the culture, the people, the history. It’s very important. Then comes the technique because if you’re a photographer you need to know your trade.

What study would you recommend?

There are so many routes. One is to go to school, if you have time, if you have the money to go to school. But that’s not necessary. These days there is so much online you can study. Another thing you can do is assist somebody. If you like somebody’s photography, if you like their work you can go down and ask them if you can assist them. You learn better than going to school. I went because I got a scholharship but I don’t think it’s necessary. There are so many photographers who didn’t go to school but they’re wonderful photographers. You take the example of Salgado, the Brazilian photographer – he’s trained as an economist. Raghu Rai – there are so many photographers who’ve never been to school. Go to the gallery, look at the magazines, go online, there are so many sites where you can learn things. Look at other people’s work. You don’t have to copy other people’s work but you can take inspiration from how they do things.

What about actually finding the work?

Finding the work is the toughest part. It needs a lot of networking now than it did before. Luckily I’ve heard in India still it’s easier than in the West. In the West you really need a network. Either you have to be really super talented and good that you have a fantastic portfolio and then you may be able to pull it off, otherwise you really need the connection. Another thing is – in Toronto I went to a talk by a photogrpaher from VII agency – I think Christopher Morris. A student asked what’s the best advice you can give to students to go to this profession, and I really liked his answer. He said now it’s almost like you have to do anything in life to make a living, you can wait tables or bartend or work in a factory, whatever. Do those things, but don’t forget to do your personal projects on the side. It’s almost like a musician, he said – any musician before they go to the record label they have to produce their music. So they bartend, whatever, but when they have time they make records. As a photographer you may not get an assignment right away, but do your projects and then build it up and show your projects when you go to meet somebody. You just can’t go and say, “I’m a graduate from so and so school, give me a job.” You won’t get a job. Find something that interests you otherwise you get bored. Say you’re into theatre or dance or landscape or anything, find your interest and pursue that. You do one well and then you move on to the next.

Moonpeak is an online and print magazine published in McLeodganj, Dharamshala, Himachal Pradesh, India. It features articles and interviews about travel, photography and books, with a focus on South Asia and Tibet. The magazine is based at Moonpeak cafe, restaurant and gallery on Temple Road, McLeodganj.
View all posts by moonpeak »
« Shanti Bloody Shanti
Subscribe to Moonpeak »